There are reasons why we use metaphors like, "sowing the seeds of knowledge," our history is intimately linked to the food we produce. Agriculture was the fuel for the rise of civilizations, a scientific and scholarly hypothesis popularized by Jared Diamond in Collapse (2011), where cultivation of grain crops enabled our nomadic ancestors to settle, grow a surplus of food, which led to an increase in population, division of labor, and leisure time for specialized crafts, arts and culture to flourish. Notably, most civilizations followed an exploitative path for both their environment and their workers creating hierarchy rather than equitable distribution of benefits, hence the title of Diamonds' book Collapse. However, in the BBC documentary Lost Kingdoms of South America (2016) it highlights civilizations that pre-date the Aztecs.[1] From the archaeological records as well as current indigenous people that carried on core beliefs and traditions from these early time periods, we can see how their cultures followed a more equitable path and engineered an agriculture that altered the environment without destroying their natural resources. Early trading between cultures was based on natural capital, strengthening cooperation between tribes and different cultures.
In this new age where globalization favors big companies and offshore accounts, many have taken to their communities, with the message, Buy Local, Support Local. This has been proven to be true; the circulation of one dollar spent in a community will circulate many times rather than funneling into a company with deep pockets and charitable smile.[2] To be sure, globalization is just a bigger word for international trading, but too often it is linked to western ideological expansion and capitalization of developing governments and economies through corporate exploitation and financial aid incentives. I am not saying, that we should stop drinking coffee, 'cause it is grown on the backs of indentured laborers and destroys the rainforest'...no, but maybe if I know how coffee grows,[3] if I know there are bad practices out there, then I will choose to buy from a local supplier who sources their cocoa from smaller certified growers in the supply chain (Homestead Coffee Roasters, Upper Black Eddy, sold at Manoff's; Folk City Roasters, Point Pleasant; Pierre's Chocolate, New Hope, select items sold at Manoff's). There is more knowledge and power contained in a seed than there is in an army. 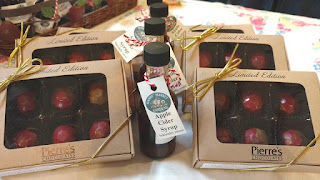