Meet someone special to us...

I opened the truck door again, the plastic tunnel covers torn to small pieces organized, wrapped and tied with string strongly but easy to loosen. Exactly like a gift. I went on my way the distance two hours far two hours back to throw the plastic bags to the recycling place. Yes this is it Ihsan*.  You see it in the way of making the cider, the canned peaches, the hard cider, the jams, the fruit itself and the intention with which it was grown and made.  Where you find Ihsan in something it will increase the beauty of it, where something lacks Ihsan it will appear less beautiful like a land dried from her water. Like most people when someone mentions farm you think of mud, I saw the stereotype as messy, disorganized living. But this changed after three years of me working here.  The stereotype is not necessarily a wrong thing. Farms need a lot of effort and time to care for the trees and the fruit and beyond that. It’s hard to focus on the other things, secondary things and from this comes mess and disorder. But here at Manoff’s the secondary things have the same amount of care from putting the effort and the time, like a mother trying to put fairness between her kids. If she wasn’t fair today, she will be fair tomorrow.
I planted a new row of peach trees with Uncle Gary after cutting the old trees from that line. He said, “The age of these trees, 15 years, after that we cut them off. Where are you going to be after 15 years?” “I don’t know,” I said, (where’s the life going to take me, even if I went with a plan?) “15 years it’s a long time?” “No it goes faster than you think” he said as if realizing the time that had passed since planting the peaches 15 years ago. Maybe tomorrow I will replant a new line of peach trees and ask the same question of who’s with me. I know I’m lucky to work here in a place that has this beauty and workmanship; to also have the space to think of myself, maybe that is a gift from the land for who takes care of it, or maybe because the land doesn’t ask questions.
-Maher Al Azzeh dearest Chelsea’s husband.

*Is an Arabic term meaning “beautification”, “perfection” or “excellence”. It is a matter of taking one’s inner faith and showing it in both deed and action. Ihsan, meaning "to do beautiful things", is one of the three dimensions of the Islamic religion: islam, iman and ihsan. In contrast to the emphases of islam (what one should do) and iman (why one should do), the concept of ihsan is primarily associated with intention. 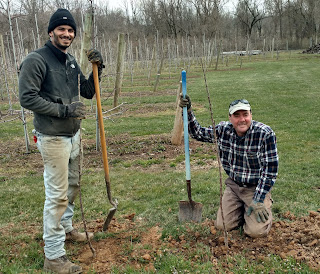