A Quality Drink from Tree to Pint 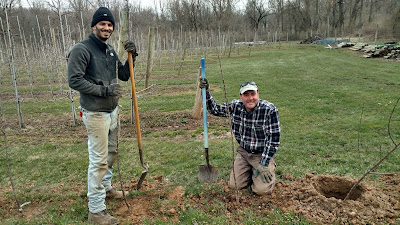 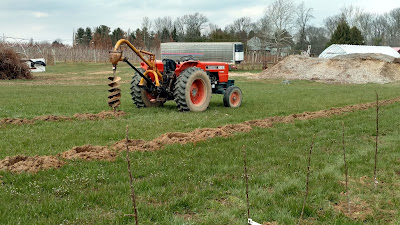 Tractor and auger for drilling the holes for trees

The saying goes, the apple doesn't fall far from the tree, but what it doesn't say is that those seeds will be completely different apple trees. We are all similar but different from our parents no?

If you plant an apple seed it has all the genetic variation of its forebears, meaning, the tree could be any combination of these genetics and result in an apple quite unlike the tree it came from. To ensure the variety of tree that we want, farmers use a technique called grafting. This is where the scion (the desired bud wood) is cut and sealed onto a root stock. The scion is the trees' mini me, a genetic copy that will grow into the same variety of apple. The purpose of grafting this scion onto a different root stock (such as Bud 9) serves two main purposes. Firstly, the root stock is often dwarfing, which enables the spindle system of growing orchard trees close together. Secondly, it often has improved disease resistance raising the bar for the clones' successful establishment. So what's with the Johnny Appleseed folk character? Why is he spreading seeds?

In Elementary school, I remembered some vague mention of Johnny Appleseed. Looking back, the nursery-school version left out some details. John Chapman born 1774, became an orchardist and nurseryman along the Northeast; establishing apple trees that were used primarily for hard cider and applejack (distilled apple ferment). Interestingly, orchards were one way to mark land claims along the frontier at this time. Somewhat of a quirky character, he was nomadic, religiously pious, but had wealth from his economic business of establishing and selling hard cider orchards.[1]

The common apples we know today have been selectively bred for sweetness, texture, and other qualities that appeal to consumers. Traditionally, Crabapple trees and tart apples were more common. From the Middle Ages (dating before this too), when lack of fresh clean water led to deaths from dysentery, people drank hard (alcoholic) cider. Fermentation has always been a way for people to survive through unfavorable seasons and scarcity. The preservation of food and drink that enabled perseverance and social bonding became tradition in many cultures. Britain, where tradition is staunch, still serves local hard cider at every pub. My parents took a cider tour of Britain, because in their minds, when they travel, they're still not off the clock. They wanted to get a business sense of traditional hand-crafted cider. After meeting fellow hard cider farmers who hosted and shared their knowledge they returned enthusiastic, repeating, "They're our kind of people!"

The simplicity of cider ferment becomes more of a craft when you want a replicable taste, smell, and quality to each brew. At home, you can just add cider yeast and let your cider bubble. If it tastes right, then it's right and if it's tastes off, then you might have cider vinegar. Here at the farm, the planning has started. Gary and his crew planted new varieties of apple trees that are hard cider specific, reaching back to the genetics of Johnny Appleseed's time, such as, Cox Orange Pippin, Albaramaryle, Arkansas Black, Newton Pippon, Harrison, Ashmeads Kernel, Yarlington Mill.

Some hard cider varieties we already grow because about half of our customer base prefers the tart apples for eating and baking. Varieties such as Gold Rush, Stayman, Winesap, and Crimson Crisp all make good hard cider. Amy has been putting in weeks of paperwork and research to complete every step that needs doing for a license to sell hard cider here at the farm. And Gary has a couple of single vintage varieties brewing, as well as table blends, spending days, weeks, months, perfecting and tweaking to create a quality drink from tree to pint.

If you are interested in being the first to sample or learn about when we launch our product there is a special email list that you can get onto. Send a message with the subject HARD CIDER, with your interest to
manoffmarketgardens@gmail.com